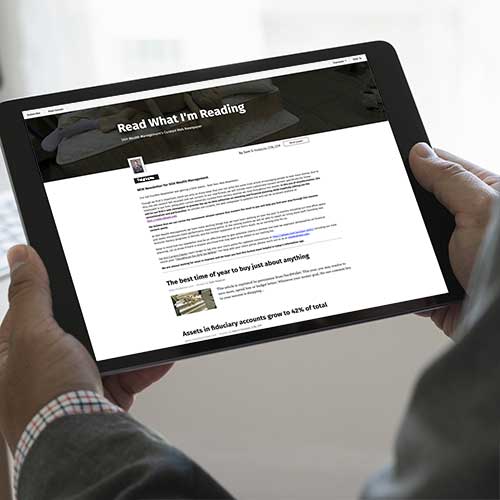 Preparing for a National TV spot is an emotional roller coaster. First, you don’t know if you will be bumped for a large breaking news headline and the letdown that comes from that. Secondly, in 24-hour news you are not even given the topic you will be speaking on until the morning of. Being prepared for anything while at the same time being ok with most of your preparation being thrown out in a short 90 second segment. Then the “On Air” light goes on and its time to improvise. Luckily my dual-degree major in Jazz Piano Performance at UofM helps out with that. (jk) Viewers aren’t looking to be lectured, so to keep conversational it is a split-second decision on what to use from the mountain of preparation. Then comes the armchair quarterback scrutiny of public opinion. Exciting for sure and a phenomenal opportunity for our firm, but not for the faint of heart.

Here are some of my random musings that did not make it “On Air”:

Good news for the markets has been rolling in. Analysts have increased their earnings estimates for S&P 500 companies by 6.0% (which is a record) and the possibility of full US employment by the end of THIS year. Finally, the progress of vaccination against COVID is picking up, with some estimating that all adult Americans will be vaccinated in the next few of months.  Big Tech alone propped up the markets in 2020 and it’s been a seamless pass of the baton to every other sector now. Tech stocks had floundered some in the first quarter of the year with large investors taking profits but with Big Tech’s recent resurgence, it could make for a good April in the markets. Along with the fact that April is historically one of the best months of the year in the stock market.

A return to normalcy could mean the massive amounts of cash on the sidelines gets spent and invested. There is roughly $4.5 Trillion in cash on the sidelines currently. Rising Yields have NOT stopped this market, like most analysts had predicted late last year. If this money were to be put to work, we would see Cyclical Stocks benefitting the most which have fairly health operating leverage and likely improving margins as well.

Are we in a bubble? How far could this market go? With the Millennial generation (which I am not in for the record… ha) being the largest demographic in America today, it will be their path that dictates how long this bull market keeps going. This also helps explain the recent demand for things like Bitcoin and NFTs. If they continue to build wealth and get back to “American Consumption” (Spend Money) then this could be the beginnings of the next bull market in America.

I have gotten great feedback from my recent segment on Fox News Business’ The Claman Countdown and I truly appreciate all of your support and trust. If you missed it, see me LIVE talking 2021 Market Action in the top link below: