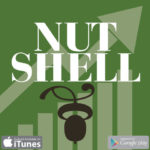 Congressman Barney Frank joined us for our first Politics NutShell podcast episode of the year. Never known to hold back, subscribe today to better understand how politics will shape the markets this year: